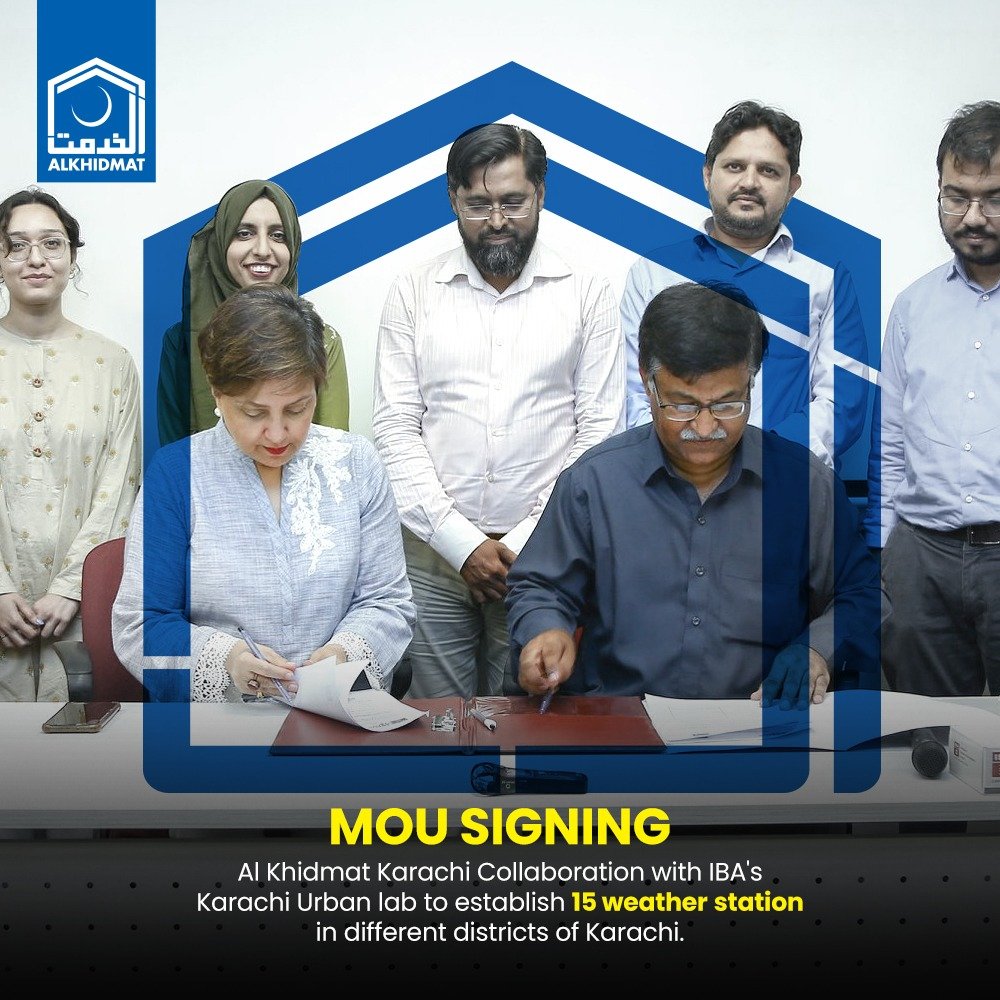 Alkhidmat Karachi and IBA’s Karachi Urban Lab have resolved to launch a first-of-its-kind initiative called the Karachi Climate Action Initiative. In this regard, 15 Weather Stations will be established in different districts of Karachi which will monitor climatic data and conduct research on climate change. Director Community Services Alkhidmat Karachi Qazi Syed Sadruddeen and Director Karachi Urban Lab Dr. Nausheen Anwar signed the agreement and exchanged documents related to this initiative in the presence of senior officials of both organisations including Muhammad Tauheed, Urban Planner and Researcher, who also spoke on the occasion. Dr. Nausheen said that climate change is threatening to play havoc with weather systems around the world, and Pakistan is one of those countries that are severely at risk of major ecological devastation, as well as destruction of life-sustaining systems. She said that Karachi had only one meteorological office and two weather stations at Jinnah International Airport and PAF Masroor Base. She added that since weather data was not made available to the public, Karachi Urban Lab had purchased 60 years of data at a significant cost. Expressing her pleasure at the opportunity of partnering Alkhidmat, Dr. Nausheed said that Karachi Urban Lab has been working in South Asia where it had surveyed 15,000 houses and 5,000 commercial units to determine the effect of climate change per head, which would prove a great help in urban planning. She expressed her hope that the results of this research will benefit the country in the long run. Qazi Syed Sadruddeen said that Alkhidmat Karachi would provide Karachi Urban Lab the locations, manpower, infrastructure and other requirements for its weather stations. He added that although Karachi had a long coastline, mountains, suitable terrain and other natural resources, the government did not pay much attention to them. He further warned that Karachi was now facing the threat of urban flooding in the monsoon. Touching upon the heatwave currently affecting the city, he said that despite possessing the biggest fleet of funeral buses, the number of casualties had overwhelmed Alkhidmat’s services. Qazi Syed Sadruddeen added that the Karachi Climate Action Initiative also plans to propagate Kitchen Gardening as a method of reducing our dependence on farm produce that requires huge quantities of expensive, imported fuel to get the product to market. Besides serving to lighten the government’s foreign exchange burden, this option can also prove an economical alternative for a common household, while reducing the carbon footprint of farm produce, making it a far more environment-friendly solution.