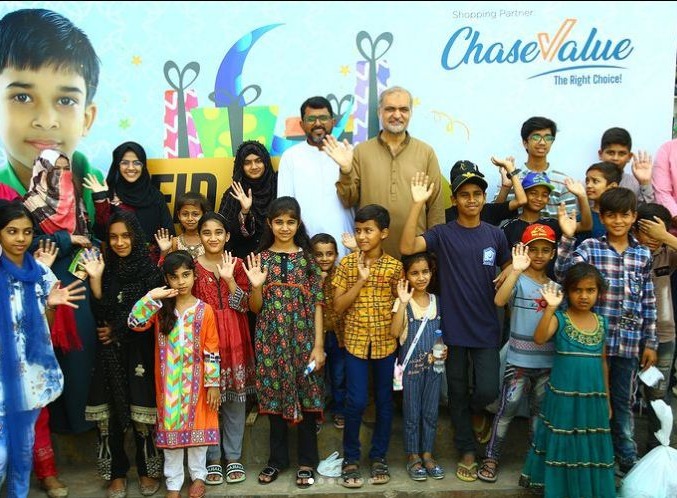 Alkhidmat Karachi recently arranged Eid ul Fitr shopping at a leading supermarket in Gulistan-e-Jauhar for 1,200 orphan kids under its Orphan Care program. Hafiz Naeem ur Rehman, Ameer Jamaat-e-Islami, Executive Director Rashid Qureishi, Director Orphan Care program Farooq Kamlani, CEO Alkhidmat Karachi Naveed Ali Baig, famous humourist Ayaz Khan, text cricketer Meer Hamza, other celebrities and Alkhidmat officials were present at the event. Speaking on the occasion, Hafiz Naeem ur Rehman said that he was pleased to see orphan children enjoying their Eid shopping like any other children. He informed the audience that Alkhidmat was supporting more than 15,000 orphan children all over the country including 1,300 in Karachi. Moreover, Alkhidmat’s Aghosh Home in Gulshan-e-Maymar houses orphan children in first-class residential facilities and provides them top quality education, healthcare and recreational facilities. He added that although this was a governmental responsibility, Alkhidmat had taken up the challenge to perform this task competently in the face of government inaction. Since the Messenger of Allah (SAWS) was an orphan himself and laid great emphasis on taking care of orphans, society should come forward and assist Alkhidmat in its efforts for orphan care. Thanking Ayaz Khan and Meer Hamza for their presence, he announced that Ayaz Khan would be representing Alkhidmat as its ambassador in the future. Expressing his happiness at being invited for the event, Ayaz Khan praised Alkhidmat’s efforts at instilling confidence in the young children and appealed to people of means to provide their help and support to Alkhidmat in this great task. Meer Hamza also expressed his appreciation for Alkhidmat’s initiatives and appealed for more people to join hands with Alkhidmat in support of their welfare activities.